Marketing is a delicate beast at times.

Campaigns can be sprawling and extensive, yet also interconnected and with short-term goals. Whether or not you are operating in an agile way, finding the right balance of so many facets – such as messaging, tone of voice, visuals and audiences – requires lots of thought. And the more high-profile the campaign, the bigger the necessity to get this right.

Naturally, with so many moving parts it’s possible to lose sight of the overall picture, and sometimes this makes campaigns noticeable for the wrong reasons. Of course, we all make mistakes. That’s why the following is a collection of examples from well-known brands, from which we can all learn from (and hopefully avoid making the same mistakes).

When Electronic Arts (EA) announced they were releasing a video game based on the 1974 film of the same name, no doubt people were excited to delve into the world of the Corleone family once again.

And with such a hot property on their hands, EA were determined to give it maximum brand exposure. But in the notoriously competitive world of video-game marketing, relying on the property itself was never going to be enough. Something distinctive was needed. So, in April 2009, EA decided to dispatch brass knuckles (a weapon synonymous with crime syndicates similar to those in the game) to journalists, alongside advanced copies of the game.

Despite EA being based in California where owning brass knuckles are illegal, they shipped them to other states where they are also illegal. In their defence, EA tried to recall them, but the damage was done, and this marketing ploy entered the headlines in earnest. 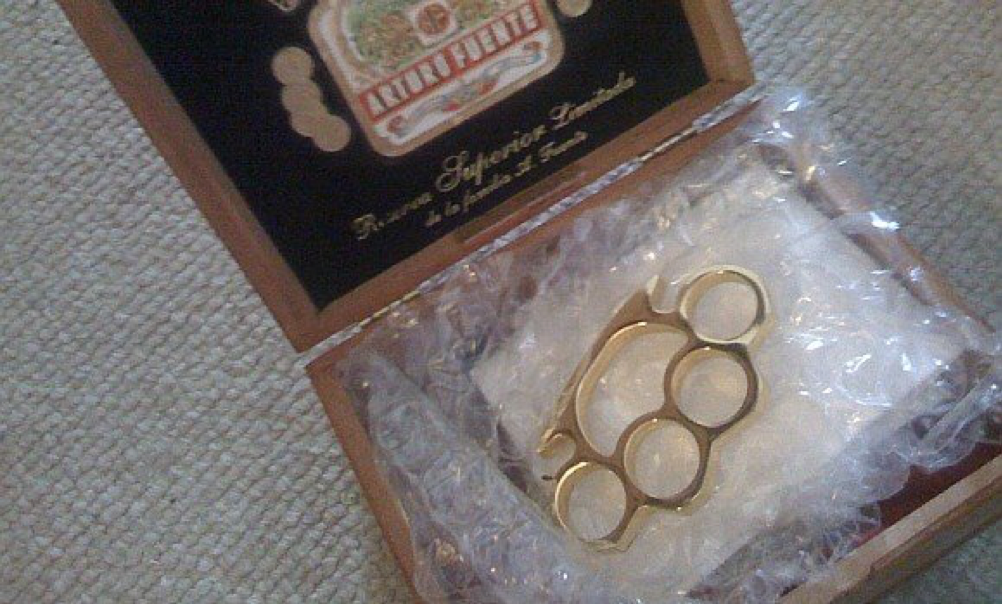 As featured in Engadget

Email campaigns are a cornerstone of marketing, relaying content and messaging directly to a potential customer and hooking them into a lead funnel.

However, one of the major challenges with an email campaign is finding the right subject line to maximise open rates. Jawbone, a wearable tech company, decided that for a promotion around Father’s Day in 2016, they would use a subject line of ‘Re: Your Dad’. Seemingly innocuous at first, and with the personal touch we marketers should always aim to provide. But then consider this email was going to thousands of subscribers – with some statistically likely to have either experienced bereavement or estrangement from their father. After the email went out, many described the impact of receiving the email: Big brands usually come with big name endorsements. In 2017 Pepsi were no different in hiring a celebrity model and professional Kardashian, Kendall Jenner, to appear in their advert. Pepsi’s aim was to ‘project a message of unity, peace and understanding’ by showing a group of protesters and police coming together over a can of their soft drink. This was at a time where protesters from Black Lives Matter were clashing with police. The advert showed Kendall Jenner emerging from the protesters and handing a policeman a can of Pepsi. In trying to make a comment on the current situation, the drinks company experienced a sizeable backlash, with the ad criticised for appearing to trivialise the Black Lives Matter protests. Pepsi later released this statement:

“Pepsi was trying to project a global message of unity, peace and understanding. Clearly we missed the mark, and we apologize. We did not intend to make light of any serious issue. We are removing the content and halting any further rollout. We also apologize for putting Kendall Jenner in this position”

Burger King and some important details about its plant-based burger

Vegan food, and culture, is on the rise and companies are clamouring to get involved. The ethical and environmental message that comes with an association with veganism is branding gold. Take Greggs for example. A bakery with a former association with a less-than-healthy lifestyle flipped its brand image on its head when it released its much-lauded vegan sausage roll. The celebrated marketing campaign played a significant part in that, playing off the product in the same way as an Apple iPhone or iMac.

Keen to join the wave created by Greggs, Burger King also released a meat-free product. The marketing was significant and very visible, and the product was marketed as ‘0% beef’ and ‘made from plants’. However, the product’s description also stated it was flame-grilled in the same broiler used for beef and chicken. By coming into contact with meat, the burger couldn’t be considered vegan or vegetarian. As a result, Burger King were accused on social media of being ‘misleading’ in their marketing:

Dove asks customers to ‘choose their body shape’ on a bottle

Dove first launched its Self-Esteem project back in 2004, and has been synonymous with ‘body positive’ messaging. But even they have been prone to marketing slip-ups.

After a run of very successful ‘Real Beauty’ marketing campaigns promoting the acceptance of all body types, Dove launched the ‘Real Beauty Bottles’. The marketing declared that ‘beauty comes in all shapes and sizes’, and so the bottles of body-wash were designed to roughly correlate to a body type.

These included hourglass, pear-shaped, tall, thin, and teardrop. While this was meant to promote multiple body types, many consumers felt Dove was encouraging them to either choose their own body type or even aspire to a certain ‘bottle’. Dove subsequently released this statement: 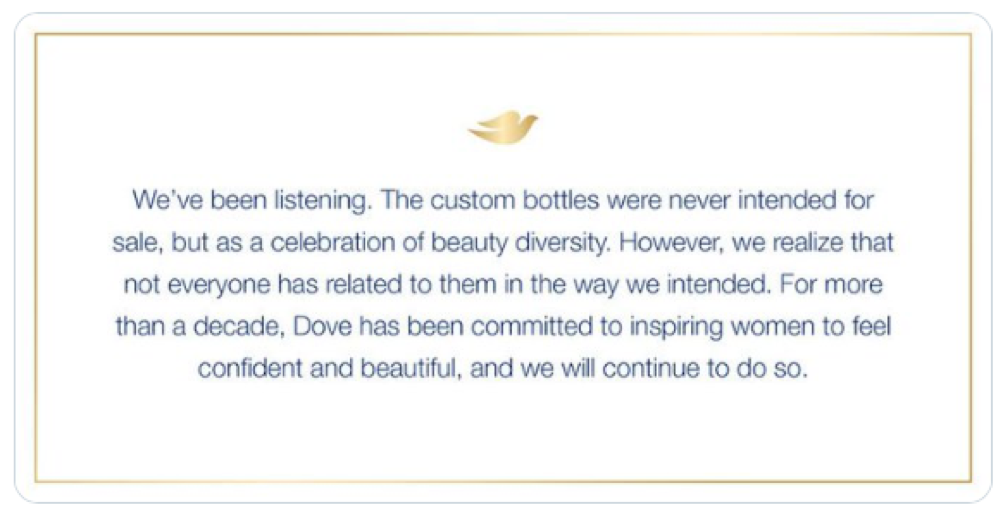